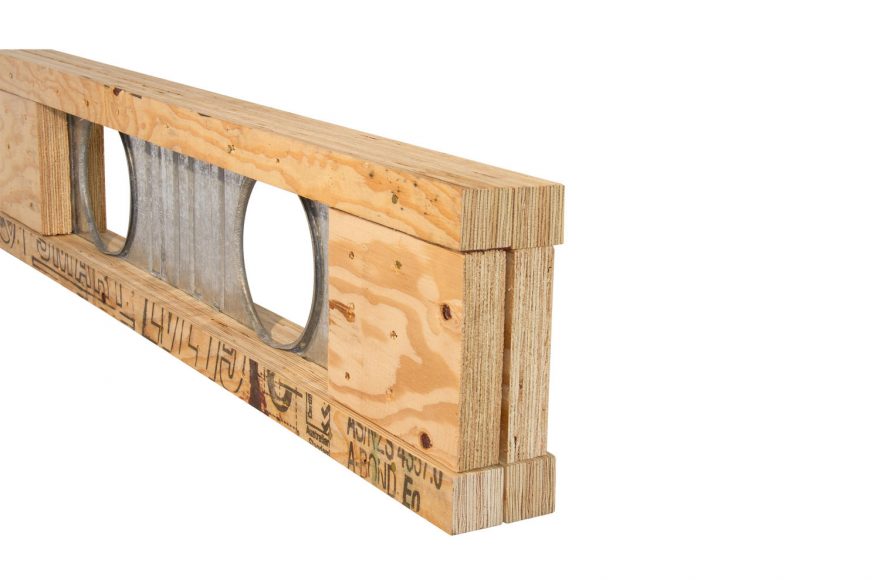 The composite TECBEAM® ‘I’ Beam/Joist comprises a continuous light gauge galvanized steel web, with press formed stiffening ribs and uniformly spaced service holes, and structural timber flanges of SmartLVL, fixed by nails and/or spikes to each side of the continuous steel web.

Structural Beam within the Floor Envelope

Unlike any other timber I-beam, the TecBeam can be used as a structural beam within a floor or roof solution.  This unique property allows designers and detailers to realise structural solutions within the floor envelope.  TecBeam can often be used to replace steel beams, with significant savings.

High concentrated loads can be placed anywhere along the flange because of the continuous steel web support and load sharing capabilities.  With the ability to sustain between 10-15kN load, TecBeam joists are ideally suited to residential, commercial and industrial structures where there are high uniform and concentrated loads.  The SmartFrame Design Centre staff are always available to assist with a solution.

TecBeam joists have proven performance in supporting large permanent loads such as tiled roofs, aerated concrete and screeded floors thanks to its rigidity and lower creep factor.  The designer can take advantage of this feature to eliminate beams that would normally be used under load bearing walls.

Due to the unique web design, TecBeam® can be used to achieve cantilevers in TWO directions by running strongbacks perpendicular to TecBeam cantilever joists.